On the 20th of December, German Society ERFOLG organized Christmas evening. The purpose was to gather Daugavpils community with our foreign volunteers, and allow them to show the traditions and tastes from their own countries. 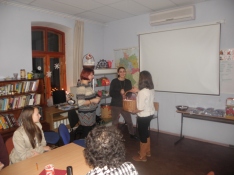 The event had a good participation from the citizens of our city, and the environment was friendly and cosy as Christmas should be.

Our volunteers – Pia and Therese from Germany, Ana from Georgia and Maria from Portugal – shared homemade food, typical of Christmas. There

se and Pia also presented a quiz about German traditions during these holiday, in which they questioned things such as how many Christmas markets are there in Germany, in which day do they exchange the gifts…

We had Khachapuri, a delicious bread with cheese from Georgia, a carrot cake and caramel apples from Portugal, and Gewürzkuchen, a tasty

spices cake from Germany – all homemade!

The lottery for the Christmas basket also took part in this evening; there were plenty of tickets sold, and it was

a great moment when we announced the winner and realised that the family was all there. The Christmas basket is a very popular habit in Portugal, in which we gather several useful and traditional items of Christmas, sell something similar to a lottery ticket for a symbolic price, and then announce the winner during an event. The idea is to provide something special to families for a small amount.

We also distributed the prizes to the winners of several contests organised by ERFOLG, all related to German culture. These contests happened in the range of the activity “Culture Marathon”, in which during the whole year of 2013 several activities took place – contests, quizzes, trips… It had the support of the Minister of Internal affairs from Germany. We would like to take the opportunity to thank all our participants, which made this activity so successful.

We would also like to take this opportunity to announce their names:

Now, on the 21st of January, all the participants are invited to a trip to Riga with ERFOLG.

In this evening, we also counted with the presence of Saint Nicholas and Servant Rupert, both figures from the German Christmas imaginary. Saint Nicholas was a bishop with a good heart, who would present the children with gifts in their sh

oes if they behaved well during the year, on the night of 5th of December. On the other hand, Servant Rupert hits naughty children with his bag of ashes to punish them.

They greeted our participants, and there was also the opportunity of explaining their meaning.

After the quiz and the lottery everyone could enjoy the tasty food and exchange experiences among all the participants.

Thanks to the participation of the citizens of our city, it was a lovely and amusing evening.

During 7 months our Volunteer – Marks Badalans participated in EVS project in Iceland, which was financially supported by Program “Youth in Action”. The European Voluntary Service enables young people to carry out voluntary service for up to 12 months in a country other than their country of residence. It fosters solidarity among young people and is a true “learning service”. Beyond benefiting local communities, volunteers learn new skills and languages, and discover other cultures. Non-formal learning principles and practice are reflected throughout the project.

Returning back to Latvia Mark is sharing his impressions and experience after his EVS in Iceland.

Iceland is the land where fire meets ice, country where you can find hot springs, volcanoes, geysers and glaciers. Place where people pacifically live side by side with elves and trolls. I chose Iceland exactly because of that and after 7 months of my EVS I experienced it all.

I was working with “SEEDS”, it is a volunteer organization designed to promote intercultural understanding, environmental protection and awareness through work on environmental, social and cultural projects. My position was named “work camp leader” and the main tasks were:

– Leading international workcamps: coordinating the group of volunteers in the organization of the work and the free time activities as well as managing the group dynamics.

– Writing a report and evaluating the projects

– Budgeting the food and other costs of the volunteers

Seems really serious and important tasks, which of course were not easy, but nonetheless it was a great chance to explore the country and spend a great time with so many different people, being in really spectacular places. I chose this EVS project because of just one line in the description: each SEEDS volunteer should bring a sleeping bag. So during the all project I was leading 10 work camps, which were placed in different places in all around the Iceland.

During all these time I met a lot of new people, imagine if every two weeks I had a new group and new hosts. After this EVS my Facebook account really grew up. The groups what I was working with were different, sometimes really small (like 4 people), sometimes quite big (like 20 people), one group can be really active and positive; another can be quiet, but nice. All groups were really multicultural, so sometimes was hard, but also interesting, to work and live with the people, where everyone comes from different countries and have totally different cultures. And there was one rule among all the leaders – in every group, for sure, there will be one strange volunteer! 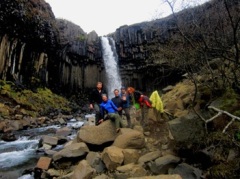 Now a bit about the places where I have been and worked, that we have been done. So we worked in really different places like farms, gardens, festivals, national parks and nature zones. My first work camp was a Viking festival in Hafnafjordur, where we met a lot of Icelandic Vikings and I was helping with festival organizing. To be honest it was a really hard work camp for me, because of many reasons, but after that one I was ready for everything! In every work camp we had different tasks, which was depending of the place, so for example in the national parks we were building touristic trails, in the farms we were working with animals, building fences and making the construction works. When work was really hard and demanding, we were finding rest and motivation in the free time activities.

We can divide Iceland in 6 parts; it is East, West, South, North, Highlands and West fjords. Each place is a bit different so for example in the South part mostly are glaciers, black sand beaches, volcanoes and lava fields; in the North there are a lot of waterfalls, mountains and snow; West is the land of sagas; West fjords, a lot of people think, that it is the most beautiful place in Iceland; Highlands is a really dangerous area with a lot of hot springs; East, I never been there, but I know that here is the biggest forest in Iceland. All these places, we were discovering with volunteers during our free time using cars, boats and horses. Sometimes we went to whale watching, fishing or just hiking somewhere, to enjoy the beautiful nature which is really clean and natural. 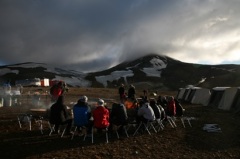 For sure EVS in Iceland was one of the greatest times in my life, I will never forget it, and of course I hope to visit it again, maybe even to lead one more work camp there. That what is written here is just a small shadow of that I really experienced and I hope that in future, I will have the chance to share my impressions in a more complete way. 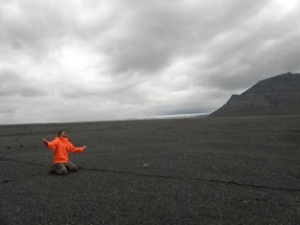